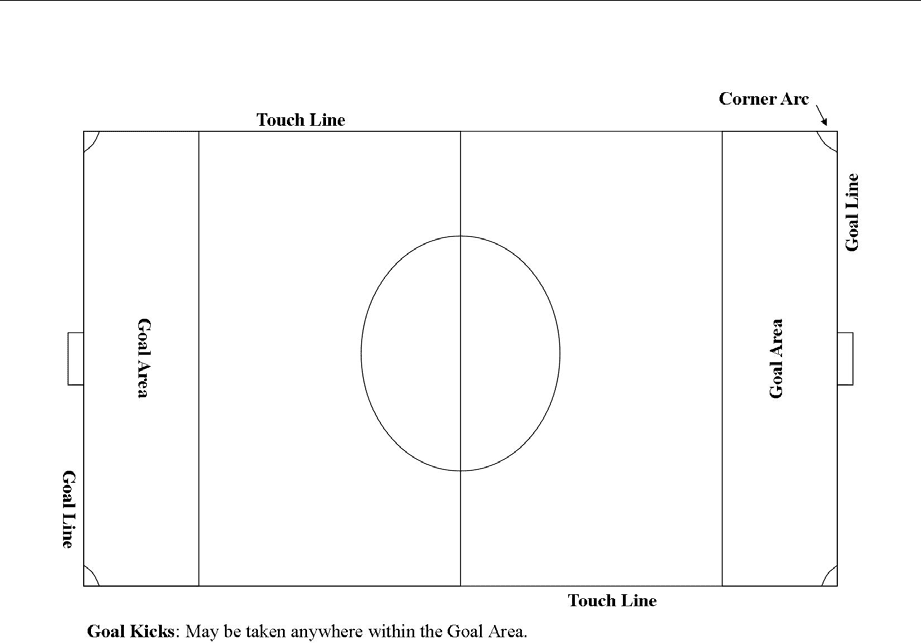 A game may be postponed at the field site if weather conditions are too hazardous for play. Extreme weather includes lightning, snow or ice on the ground. Rain is not a reason to postpone play. In case of a postponed game, the MDSL Sports Coordinator has the ability to re-schedule the game as long as it does not conflict with the remainder of the season.

All teams are responsible for the cleanup of the fields after each game. Please do not leave garbage on the sidelines.

U6 – U7 Age Groups: 4 v 4 w/o Goalkeepers. Four 12-minute quarters with 1-minute quarter breaks and a 3-minute halftime break. A size three (3) ball will be used for games.

U6-U7 Age Groups: Teams shall have no more than 8 players on the roster.

U8 Age Group: Teams shall have no more than 10 players on the roster.

U9-U10 Age Groups: Teams shall have no more than 12 players on the roster.

U11-U12 Age Groups: Teams shall have no more than 14 players on the roster.

U13 Age Group: Teams shall have no more than 18 players on the roster.

From U6-U8 Age Groups, teams may not place a defender in front of the goal to try and prevent the opposing team from scoring. Defenders may remain in their own half of the field to teach basic positioning but defenders will not be allowed to simply remain within a few yards of the goal at all times. Players are however allowed to play within the circle in the goal box, meaning that they can take the ball out of the circle but they are not allowed to just stand in there.

Build out lines will be enforced for U-6 – U-12. On goal kicks only, the opposing team must set up outside of the line. Once the ball is played and the team with the ball touches it after the first pass, then the opposing team is allowed to pressure the ball and play can continue.

Substitutions may be made, with the consent of the referee during any stoppage of play or for an injury.

It shall be the duty of the coaches to encourage clean competition and good sportsmanship at all times and to enforce the rules and regulations of the league.

Coaches and parents are not allowed to talk to the referees and there will be ZERO tolerance for bad behavior towards the referees. The referees are members of the league and are an integral piece to the structure of our games. Without referees, these games will be scrimmages and would not enable the coach to strictly focus on improving his or her team(s), so please respect the referees.

All coaches, team managers, and assistants must comply with all Risk Management requirements. There must be an approved adult at all functions.

In case of injuries during the game, assure that the player is properly attended to. Check his/her condition after the game and follow up with a call home in the evening. In the event an injured player requires medical attention, he/she must have a written release from the doctor before returning to practice or playing with a team.

Coaches and players shall be on the opposite side of the field to the parents.

The ball is in play when it is kicked and moves forward. The kicker shall not play the ball a second time until it has been touched or played by another player. Punishment: For any infraction of these laws the kickoff shall be retaken.

A goal shall not be scored directly from a kickoff without the ball being touched by at least one other player on either team.

After a goal has been scored, the game shall be restarted with a kickoff for the team that gave up the goal.

To start the second half, the game will be restarted with the kickoff by a player of the opposite team to that of the player who started the game.

Restarting play after temporary delay: In the case of a temporary suspension due to an injury or any unusual situation, if one team is clearly in possession of the ball, the game shall be restarted by an indirect free kick by the team in possession of the ball at the point where the ball was when play was suspended. Should there not be clear possession at the time play is suspended due to an injury or any unusual situation, there will be a drop ball at the spot where the ball was declared dead. The ball shall be deemed “in play” when the ball has touched the ground.

Ball in and out of Play

No team may score while a teammate is in his/her own 6 yard goal area.

The offside rule will not apply to U-6 – U-12 teams however the intent of the rule will be followed. Positioning a player in front of the opponent’s goal irrespective of the location of the ball on the field is contrary to the aims of the league. The referee shall take appropriate action to prevent this kind of play (an indirect kick to the offended team and instructional statements to the violating players and coach).

Free Kicks: Free kicks shall be classified under two (2) headings:

Penalty kicks will be awarded for U-9 and up and be taken at the spot.

Play should stop when a player acts in a careless, reckless, or dangerous manner. The incident should be explained and then play is restarted with an INDIRECT FREE KICK for the opposing team.

When the whole of the ball passes over the whole touch line, either on the ground or in the air, it shall be put back into play by a throw-in. The throw shall be taken from the point where it crossed the line, by a player of the opposing team.

The thrower must face the field of play and must keep both feet on the ground while releasing the ball. He/she shall use both hands on both sides of the ball to deliver the ball from behind and over his/her head.

Several kick-ins may be allowed if an incorrect kick occurs. Before the re-throw, the referee will instruct the thrower on proper technique and then proceed with the re-throw.

A goal shall not be scored directly from the kick-in.

When the whole of the ball passes over the whole of the goal line,     excluding the portion between the goal posts and under the crossbar (either in the air or on the ground), having last been played by one of the players on the attacking team, it shall be kicked directly into play by a goal kick. Defending players can’t stand on the edge of the box.

A goal kick may be taken from anywhere inside the goal area.

Any defending player may take the goal kick.

The kicker shall not play the ball a second time until it has been touched or played by another player.

The ball is in play when it crosses outside the goal area.

The opposing team must be 6 yards away before the ball is kicked.

When the whole of the ball passes over the whole of the goal line excluding that portion between the goal posts and under the crossbar, (either in the air or on the ground), having last been played by one of the defending team, a player of the attacking team shall have a corner kick.

The ball shall be placed within a three (3) foot arc from the corner flag or cone and shall be kicked into play from that position by an attacking player.

A goal may be scored directly from a corner kick.

Players from the opposing team to the kicker shall not approach within the distance of the center circle measurement (6 yards) of the ball until it is in play.

If the player who takes the kick plays the ball a second time before it has been touched by another player, the referee shall explain to the kicker the proper procedure of a corner kick. Then the referee shall award an indirect kick to the opposite team from a spot where the infringement occurred. For any other infringement the kick shall be retaken.

Good judgment, sportsmanship and fair play should govern the decisions and actions of all the coaches, referees and spectators.

Coaches, their assistants or spectators are not allowed on the field of play during the game unless permission is given by the referee (in case of emergencies or unusual situations).

Public scores will be recorded for U-9 and up.

Heading is not allowed for kids ages 11 and under.

Slide tackling is not allowed for kids ages 8 and under.

In addition to carding, teams must provide a game day roster with player date of birth and photos. Each team must provide 2 copies of rosters, one that must be handed to the referee and the other to the opposing team. This is to make sure that all players are of age to play in the game.